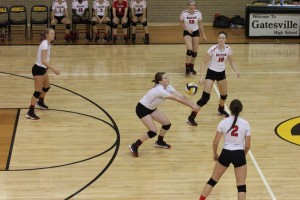 Avenging a three-set loss that Belton Lady Tigers suffered at the hands of the Salado Lady Eagles on Thursday afternoon in Gatesville with a straight-set win over Salado in Belton on Friday night, the Lady Tigers set their sights on winning the fifth-place bracket oif the Gatesville Invitational Volleyball Tournament.

The Lady Tigers went 4-1 in the tournament and are 10-6 overall, with Lorena coming to Tiger Gym on Tuesday in their first game with class in session. Game times will be 5:30 p.m. for Freshman and Junior Varsity. Varsity start time is slated for 6:30 p.m.

Belton was off and running, as Anna Becker served nine straight points, Kelsey Jones, Allison Waits and Brey York had early kills to jumpstart the Lady Tigers into an 11-2 lead. Following two Jarrell points, Waits, York and Abbey Morgan had kills, while Jamie Janczak and Elecia Jackson had blocks in an 11-4, set-closing run to give Belton the first set by 17 points.

The Lady Tigers jumped out to a quick 3-0 start in the second set before the Lady Cougars scored four straight points to take their only lead of the entire match, 4-3. Belton methodically pulled away outscoring Jarrell 21-14 to win the match two sets to none and set up the fifth-place final game against the Lady Goats of Groesbeck.

Belton struggled out of the gate against Groesbeck, falling behind 3-0 before taking a 5-4 lead. The Lady Goats fought back to take a 13-7 lead when Belton scored seven straight points and took a 14-13 lead. With the scored tied at 16-16, Jones, York and Waits contributed huge offensive plays as part of a 9-1, set-closing run to take the first set by eight points.

Groesbeck got another quick 3-0 start and this time extended it to a 6-1 lead before Belton head coach Stacy Meyers called a timeout. The Lady Tigers clawed their way into the lead at 12-10 before a lethal 15-9 run gave the Lady Goats the match tying set, winning by four points,

In the third and deciding set, Waits and Morgan combined for three kills to start the set, giving Belton a 4-1. Groesbeck tying the score at 6-6 and teams see-sawed before the Lady Tigers pulled away late to win the match by two.

Belton showed a ton of character getting off of the deck from their loss on Thursday afternoon that relegated the team to fifth-place bracket. After the first Salado loss, the team won seven of their last eight sets. The team has a 25-15 record in sets won over their current 10-6 stretch.

For more information on the tournament, please see next week’s copy of The Belton Journal.