On Wednesday November 8th, five Belton Tiger athletes will be singing their National Letter of Intents to continue their athletic and academic careers at the collegiate level. The five tigers signing are Shane Mejia – Nicholls State – Baseball, Bethany Edwards – Lamar University – Softball, LéDea Harris – Western Texas College – Volleyball, William Paysse – Texas A&M – Golf, Noah Henry – Arizona State – Swimming. The ceremony will be held at the Belton Athletic Complex at 4:00pm on Wednesday November 8th. We invite you to attend as we celebrate the accomplishments of these athletes. 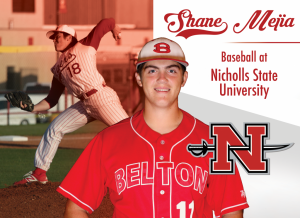 Shane was a three year letterman and two year starting pitcher for the Tiger baseball team.  A hard throwing left handed pitcher with good breaking stuff and change up.  Though his talents lead him on the field, the backbone of his success stems from hard work and dedication for the sport.  If one was to look for Shane, he could most likely be found in the weight room or in a bullpen trying to prepare his body or perfect a pitch.

Not only is he a talented baseball player, he is also a great student.  Among the top ranked students in his class, his dedication to academics is as important to him as baseball.  If the combination of being a good baseball player and student isn’t enough, he is an even better human being.  You can always find him with a smile on his face and a willingness to help others.   Congratulations on signing with Nicholls State University! 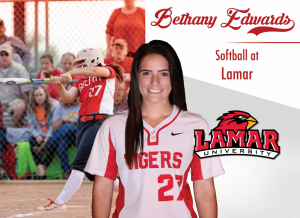 Bethany Edwards will continue her softball career by signing a letter of commitment to play with Lamar University on November 8th. Bethany is a four year letter for the softball program at Belton High School. She is not only an accomplished athlete, but is an outstanding student as well. Bethany is a member of the National Honors Society and achieved academic all-district honors from the 2015, 2016, and 2017 seasons.

During Bethany’s freshman year she received the District 12-6A Newcomer of the Year award and TSWA Honorable Mention First Base. Bethany is a catcher by trade, but was asked to play first base during her freshman season.

Bethany’s sophomore season brought on more awards and accolades. She racked up the District 12-6A Offensive Player of the Year award and was named TSWA First Team All-State Catcher. Bethany had an outstanding sophomore season, hitting .417 with 48 RBIs, 14 doubles, 1 triple, and 11 homeruns.

If anyone thought that Bethany’s sophomore year was impressive, her junior season would have blown them away. She was once again named District Offensive Player of the Year and TSWA First Team All-State Catcher. She received a new honor by being named to TGCA First Team All-State. Bethany hit .539 during her junior season, setting the school record for batting average. She drove in 45 runs, and brought her career homerun total to 20. She is 3 homeruns shy of having sole possession of the career homerun total record here in Belton.

“Bethany is the type of player that every coach wishes they had. She has been a catalyst for our offense, and the playmaker for our defense. Her work ethic is unparalleled, and her drive to be the best at her position forces everyone around to take notice. She is a leader for our program, and when her career at Belton is over, she will truly be missed.” –Coach Matt Blackburn

Congratulations Bethany! We look forward to seeing what your senior season holds! Lamar is lucky to get you! 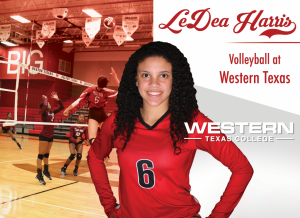 Le’Dea “L.D.” Harris was a two-year letterman for Belton Volleyball. Le’Dea moved in from the Austin area, and immediately connected with her teammates. Le’Dea played both seasons as an outside hitter, and her efforts in her debut on varsity earned her a spot on the 2016 District 8-6A First team. In the regular 2017 season, Le’Dea averaged 1.8 kills per set. Opponents could easily dismiss her tiny 5’7” frame, but Le’Dea’s athleticism and power behind her swing speak volumes over her stature. Le’Dea is a student of the game, and often asks many questions in pursuit of increasing her volleyball IQ. She has the ability to ignite the excitement of her teammates with her contributions. There is no doubt that Le’Dea will blossom at the next level of play. Le’Dea will be continuing her academic and athletic career at Western Texas College, and Belton Volleyball wishes her the best in her exciting future. 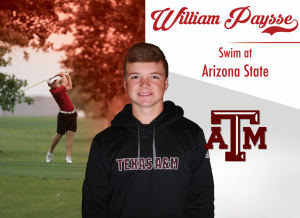 Accustom to the leadership role on a championship Golf team (since his Middle School was District Champs both his 7th and 8th grade years)William had no problem stepping up to the performance level expected of the top players on a team like TIGER ONE.

Here are just a few of his TIGER GOLF highlights:

Senior year – “TBA – with expectations the highest that they have likely ever been.

If there were such a thing as a TIGER GOLF Ring of Honor, William Paysse’s name should be right there with those of other great players that preceded him in the success story that TIGER GOLF has become.

The things that have made William an exceptional High School player will continue to be the things that will carry him to success at the next level. 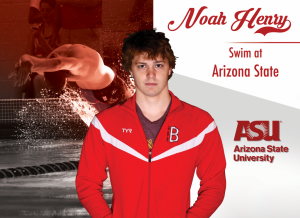 Noah has had an outstanding career at Belton High School. His tireless work ethic gives him the tools to succeed. He loves to compete, the greater the competition, the more Noah enjoys it.

Has won 6 out of 6 Individual Events at District Meet

Olympic Trials Qualifier in 2 events in 2016

We expect great things from Noah as he continues his career at ASU!