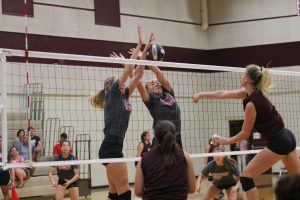 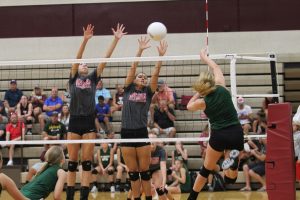 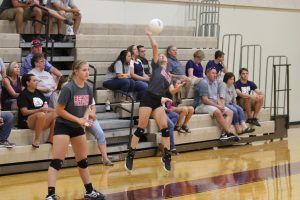 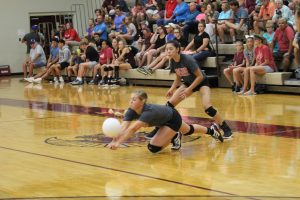 Belton Volleyball traveled to Troy High School on Saturday morning to take on the Moody Lady Bearcats and Troy Trojanettes in a pair of 50-minute scrimmages.

In the scrimmage format, the teams switched sides after 25 minutes.

The Lady Tigers took on Moody to start the morning and put the pressure on the Lady Bearcats early. Isa Holguin’s had a kill, assist and dig to account for three of Belton’s first four points. With Belton up 6-5, Eli Smith’s block and Kelsey Surovik’s kill set up an 8-3 burst, with Surovik’s second block of the streak making the score 14-8.

The teams kept working through the 25-minute period, as Belton took a 10-point lead towards the 10-minute mark, 29-19.

The Lady Tigers closed out the opening portion of the scrimmage with a 9-3 run, with Abbey Karcher, Kamryn Madden and Surovik picking up kills in three of the last five point of the game. Belton took the opening half, 38-22.

Moody took a 6-4 lead to open up the second half. An ace by Emily Holder fueled a 9-3 run with a dump kill in the Moody midcourt to give Belton a 13-9 lead.

The Lady Bearcats went on a 5-1 run, which was headed off by Madison Ward and Miranda Davila picking up key digs to give Belton the lead for good. The Lady Tigers closed out the session with a 19-8 streak to win the second game, 33-22.

The second scrimmage opponent was the homestanding Troy Trojanettes.

The teams split the first six points of the opening game before the Trojanettes scored four straight points to give Troy a 7-3 lead.

The teams traded points back and forth before Belton took a nine-point lead, with two of the points coming on Holder’s dump kill in the Troy midcourt and back corner kill. The Lady Tigers took the first 25-minute session, 33-27.

Smith and Madden each had two kills in a 9-1 start for Belton.

Troy broke serve and kept the Trojanettes to within eight points, but Belton went on another prolonged run. With the scored 16-8 Belton scored seven straight points to give the Lady Tigers a 14-point lead, 23-9.

The Lady Tigers then closed out the game with a 20-10 clip to end the scrimmage with a 43-19 win in the second 25-minute period.

“We have a heavy road schedule for August, so we were thankful to stay close to home and scrimmage with quality local teams,” Brodbeck said. “I felt we improved our level of play as the morning progressed. We were able to look at different combinations of personnel, identify areas to tweak, and are very excited to take those thoughts and put them to action Monday night against Stony Point.”

Brodbeck was also happy with the junior varsity and freshman teams as well.

“I was very pleased with the sub-varsity performances today, and feel we are very strong this year,” Brodbeck said.

The Lady Tigers will take on Stony Point in Round Rock on Monday evening to open up the 2018 season.