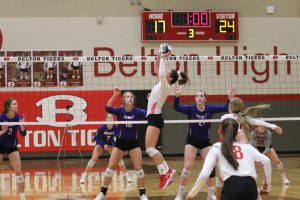 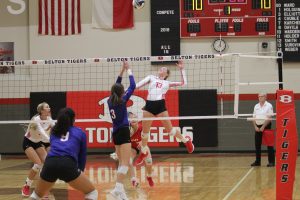 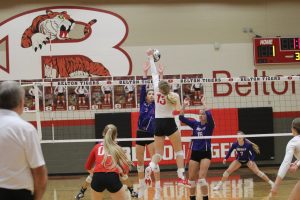 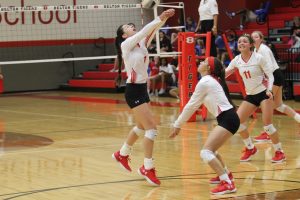 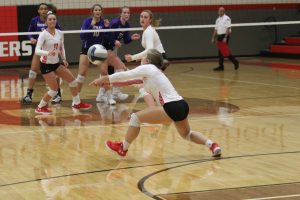 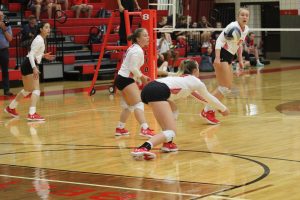 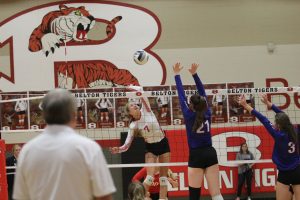 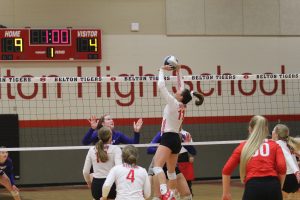 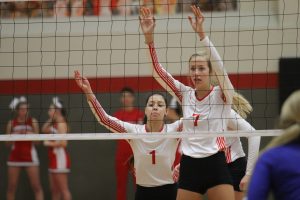 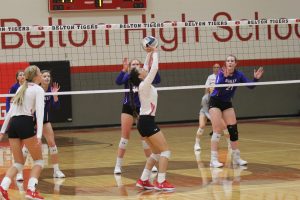 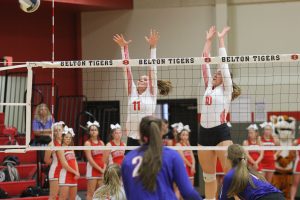 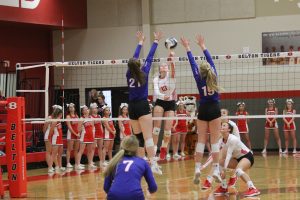 It can easily said that Tuesday night’s game at Tiger Gym will be remembered for being a classic.

The win moved the Lady Tigers up to 6-3 in District 12-6A play. Midway sustained their first district loss of the season and sit at 8-1.

The win also avenged a district loss at Hewitt on August 21 and a Volleypalooza loss in Leander on August 24.

The teams played the first game even keel until Belton went on a 6-0 run in the middle of the set to take a 16-10 lead. Midway went on a 7-1 to pulled to within a point but put the Pantherettes away by five points to go up one game to none.

Both teams played evenly in the second game before Belton used an attack by Kelsey Surovik and kill by Emily Holder to take a 12-8 lead. Midway’s balanced attack paced a 17-9 run to win the second game by four points and tie the match at a game apiece.

Midway never trailed in the third game, having led by as many as seven points. Emily Holder and Abbey Karcher had kills late, but the Lady Tigers dropped the third game and trailed the Pantherettes, two games to one.

The Pantherettes were poised to run away with fourth game and were up 14-6 when Belton head coach Krystal Brodbeck called a time out.

A kill by Holder and a block by Isa Holguin electrified the home crowd at Tiger Gym and the march was on. Terrific diving digs by Madison Ward and Jaci Cauble helped keep the momentum going. Belton’s 11-3 run tied the game at 17-17.

The game was tied six different times and was tied at 23-23 when Kamryn Madden served the final two points to tie the match at two games apiece and force a fifth and deciding game.

Holder’s ace and Surovik’s kill helped the Lady Tigers out to a 4-0 lead. Midway cut the difference to pair of points before Belton when on another 4-0 run and took an 8-2 lead.

Midway answered with two points, before two Holder assists, two Surovik kills, and three aces by Shelby Elliott closed out the game and the celebration was on.

“I could not be any prouder of the team for the way they worked together and fought back to push Midway to a fifth set,” Brodbeck said. “We knew coming into tonight that we would need to be ready to make adjustments quickly and effectively. Our players were coachable, focused, and used the excitement from the crowd to propel each other to this win. What a fantastic crowd and amazing support for this awesome home court win.”

“I am very proud of the girls tonight,” Belton assistant coach Kayla Perez said. “We knew they were capable of playing this well all season and tonight it showed. Our defensive and serving really stepped up.”

The junior varsity and freshmen both fell in straight sets earlier in the night.

“Overall, I was pleased with our performance,” Belton JV coach Jordan Petter said, whose JV team loss 25-20 and 25-20. “We didn’t play up to our potential on the first set: Trying to set cross shots, penalties from back row attacks, and out of position on defense. However, we fixed those mistakes on the second set. I’m glad we progressed from set to set, but overall, it was minor errors that set us behind.”

“Tonight, the girls were not mentally in the game,” Belton freshman head coach Aereal Dickerson said. “We were making mistakes I have never seen this team make. Serve receive once again became our Achilles heel. We struggled hard for a decent pass which didn’t allow us to have any kind of offense. We were not defensively where we are suppose to be, which hurt us also. Just a lot of “back to the basics” is needed this coming up week. I expect some improvement by Friday.”