The Lake Belton Tennis Team drove to Groesbeck HS for their first away match on Tuesday, Oct. 2 against Groesbeck MS. With the bus arriving late to the match, the team quickly hit the courts with eagerness to compete. The doubles teams played first and experienced some unfortunate loses. Caden van Cleave and Julian Lamb fought hard and lost their match by only two games. While, LBMS mixed doubles duo Brodie Reed and Macie Echols pulled out a 6-1 upset against their opponents.

LBMS singles took to the courts with a mission in mind to even up the score. Boys singles players Brodie Reed, Owen Gersbach, Alex De La Rosa, William Furst, and Josh Levant all fought through the heat and emerged victorious. Girls singles winners include Macie Echols and Meredith Foegelle.

Overall the score ended with a disappointing 9-11 score. However, every LBMS player, singles and doubles alike, showed improvement and have all vowed to work diligently for their spring rematch against Groesbeck.

The next LBMS Tennis fall match-up is on Wednesday, Oct. 10,  at 4pm vs Vanguard at BHS. 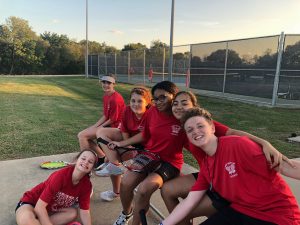