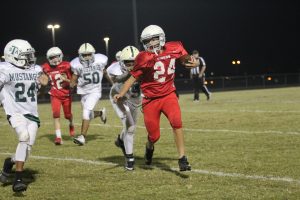 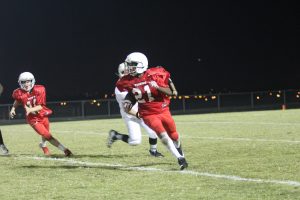 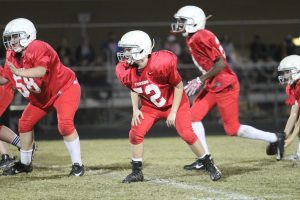 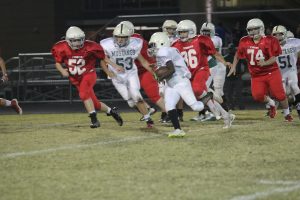 The North Belton Middle School 7A Tigers were the only obstacle standing in the way of the Travis Science Academy 7A Mustangs’ perfect season at NBMS Field on Monday night.

The Mustangs peppered the Tigers for 33 points in the first half and completed a 9-0 season with a 39-0 win over the NBMS 7A Tigers.

The Tigers were able to move the ball around, as Trap Johnson hit Ty Legg for a 14-yard completion, Mo Dockery ran for gains of 17 and 13 yards, and Johnson connected with Dockery for a 12-yard completion in the first half.

On a running clock in the second half, the Mustangs drove from their own 40 to the NBMS 18. On fourth down and seven, Clint Beck tipped a pass away to force a turnover on downs.

With the Tigers unable to convert a fourth down and six-yard play, Travis turned the opportunity into a 14-yard touchdown. The point-after failed, which kept the score 39-0.

Dockery’s 50-yard kickoff return to set up North’s final drive of the game started the Tigers out in Travis territory. But the Tigers went four-and-out, turning the ball over on downs to end the contest.