The Lady Tiger Powerlifting Team was well represented at the THSWPA State Meet on Saturday at the Extraco Events Center in Waco.  Five lifters completed a journey that began when they gripped the bar at that first “max” session before Christmas break.  Seniors Jaci Cauble (123), Isabelle “Izzy” Gutierrez (165), Kaylee Hausam (259), and Angela Ferrer (259+) were joined by freshman phenom Paige Bridenstine (114) to round out the Belton qualifiers.  The State Powerlifting Meet always has it’s share of drama, and this one was no different.

The highest Lady Tiger finisher of the day was Kaylee Hausam, who finished 5th in a highly competitive 259 lb. weight class.  This was her third trip to state in a row, and until Saturday, a medal had eluded her.  It did not come without adversity though.  Kaylee completed her first deadlift attempt (380), but on her second attempt she tweaked a hamstring injury she’s been fighting all season and wasn’t able to finish the lift.  Luckily, her first attempt along with an outstanding squat (410) and bench press (220) kept her secure in the “five” spot and she was finally able to bring home some hardware from state.

The 259+ weight class turned into a true battle of attrition for Angela Ferrer.  In the weeks leading up to regionals and state, we talked about “staying in the fight” no matter what, and on this day, Angela did that and more.  Angela got every lift but one on Saturday and set personal records on squat (320) and deadlift (315).  She stayed calm and collected throughout the competition, but when she got the PR on her final lift as a Lady Tiger, the tears flowed.  Her outstanding effort resulted in a top 10 finish, ending the day in 7th place.

Adversity reared it’s ugly head early for Jaci Cauble in the 123 lb. weight class, and tested her resolve all day.  She was immediately thrown off schedule by missing her first and third squat attempts.  After squat she was sitting in lonely and unfamiliar territory, 15th place.  She got up off the mat and fought though.  She matched her PR on bench press with a 160 lb. lift, and that was good enough to move her to 12th place.  Top 10 became the target, but she knew she needed three clean lifts to get what she wanted.  Three lifts and a deadlift PR later (305), Jaci ended a gutsy day in 9th place.

Izzy Gutierrez must have felt a little bit like deja vu all over again.  This was her second trip to state in a row in the 165 lb. weight class, and as with last year, the chips were stacked against her and seemed insurmountable.  The one thing that you can say about Izzy is once she puts hands on the bar, she becomes 100% consistent, and that proved true again on Saturday.  While watching many of her competitors miss lifts and “bomb out” over the course of the day, all Izzy did was PR on squat (345) and PR on deadlift (340).  Izzy’s combined total of 865 lbs. was enough to earn a top 10 finish, as she ended the day in 9th place for the second year in a row.

Our only underclassman, Paige Bridenstine, got her first taste of state competition in the always tough 114 lb. weight class.  She started the meet with a bang, hitting a personal record of 290 lbs. on her final squat attempt.  That was also the third best squat total of the day in her weight class.  Paige matched her PRs for bench press and deadlift after that and was able to hold on for a top 10 finish.  She ended the day in 7th place and once again showed the truly unlimited potential that will no doubt lead to an extremely bright future in the sport.

Each athlete that competed on Saturday had to fight a battle not only with her competition, but also with herself.  The adversity that athletes face in championship-level events is always magnified, and these five ladies stepped up to every challenge they faced on Saturday.  They represented both themselves and Belton High School with class, pride, grit, and tremendous determination.  Congratulations to each of them for their performance at the THSWPA State Meet and for an outstanding season. 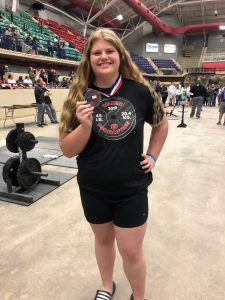