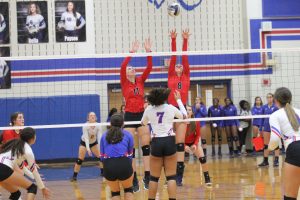 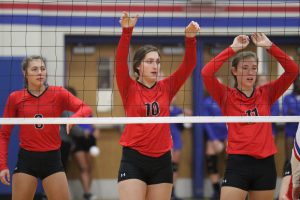 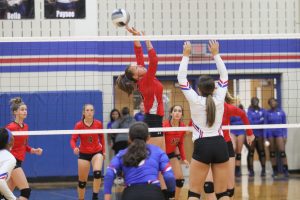 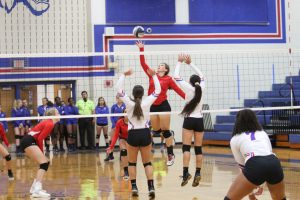 The Belton Lady Tigers Volleyball Junior Varsity and Freshman Red teams traveled to Temple on Tuesday night to take on the TemCats.
The JV won the first game decisively. However, the Lady Tigers rallied from 18-8 down with a 17-5 rally to net the second win and two-game sweep of the TemCats.
The scores were 25-13 and 25-23.
Belton led by 14 points twice in the first game before Temple pushed the deficit back to 11 before Keira Campbell’s kill gave the Lady Tigers the 12-point win and 1-0 lead in the match.
A slow start led the opportunistic TemCats to grab 16-6 lead, forcing head coach Jordan Petter to call time out to refocus the team.
After splitting the next four points, Belton trailed 18-8 before mounting a rally that forced Temple to call two timeouts and were not be able to stop the match-clinching 17-5 rally.
“Coming off of a rattled win from Waco last week, we knew tonight would be a determining factor for us,” Petter said. “During the first set, we remained consistent, communicated well, and ran a solid offense. Stepping on the floor for the second set, our mindset faltered, playing too relaxed and content. When we were down 7-17, our headspace shifted to determination, instead of playing fearful. Point by point, our momentum progressed and so did our confidence. Even though the second set was ugly, I told the girls in the postgame that a positive did result from it: when we are faced with adversity, playing with pride will prevail. This matched showed the girls how much really wanting a win can affect performance and outcome.”
The Freshman Red team beat Temple 2-0, by scores of 25-18 and 25-15.
“The Red team did well in tonight’s victory against Temple,” coach Destini Jury said. “The TemCats were athletic, but Freshmen Red’s discipline and smart decisions helped them push through. Madison White and Charlotte Kallina dominated the back row, picking up on the scrappy TemCat offense and make great passes, which helped set up our setters. I’m excited to see us grow offensively and build on this win.”