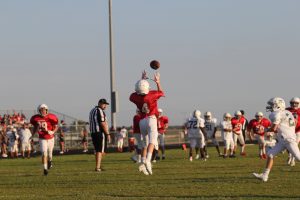 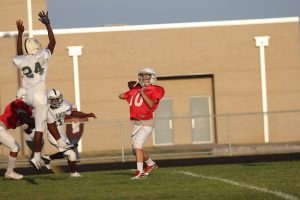 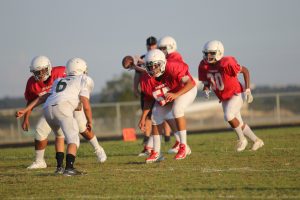 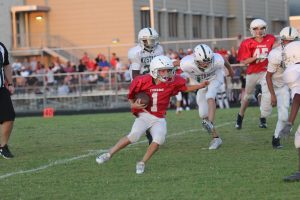 The mark of a good team is the ability to cash in on others miscues.

Opening night jitters got the best of the NBMS 7A Tigers on Monday night at North Belton Middle School Field, as they hosted the Travis Science Academy Mustangs 7A squad.

Although the Tigers scored twice during the contest, the Mustangs scored 25 points off of Tigers’ turnovers to hand NBMS their first loss of the season, 31-16.

Ty Green pulled down an interception late in the first quarter to end a Travis trip inside the red zone.

However, a bad snap over quarterback Kellen Scarborough’s head with a gusting Southerly wind landed in the end zone and a Mustang fell on the ball for a touchdown. The point-after run gave the Mustangs a 7-0 lead with 6:03 to play in the first half.

The ensuing drive saw the Tigers begin to march down the field behind solid runs by Aisea Filitonga and Cameron Bartz. A fumble at midfield was recovered by Travis with 3:05 to play in the first half.

Three plays after the fumble, Travis scored on a 40-yard touchdown run. A bad snap ruined the point-after attempt to keep Travis out front with 2:24 to play in the half, 13-0.

Tate Lisenbe recovered an onside kick at midfield and the Tigers went to work. Scarborough’s 38-yard set NBMS up in the red zone. On second down and 15 at the Travis 17, Scarborough found Filitonga over the middle for a touchdown. Filitonga toe-punched the two-point place kick ala Mark Moseley to pull the Tigers back to within five points before the half, 13-8.

Filintonga recovered a fumble on the second half kickoff. However, the Tigers turned the ball over downs.

On the very next play, Filitonga recovered another fumble at the Belton 48.

Scarborough found Cash Robin for a 13-yard pass and scrambled 27 yards for a first down. The Tigers got the ball down to the Travis 1 and had cracks at the end zone. On third down and goal to go at the one, a bad snap ended up in a Mustang’s hands, which changed the momentum of the game completely.

It was another fumble at the Travis 20-yard line that was picked up by the Mustangs and returned 80 yards for the touchdown. The extra point failed, which kept the Mustangs in front by 11 points at the end of the third quarter, 19-8.

The Tigers’ longest drive of the game 49 yards, 42 of which were completed passes to Filitonga and Zachary Dodd. The drive stalled on three straight incompletions at the Travis 15.

Travis extended the lead on the very next play on an 85-yard touchdown run straight up the middle. The extra point try failed as the Mustangs led 25-6 with 4:12 to play in the game.

After the Mustangs recovered the onside kick, Travis scored with 16 seconds to play on a 56-yard touchdown run. The point after try failed and the game ended shortly thereafter.