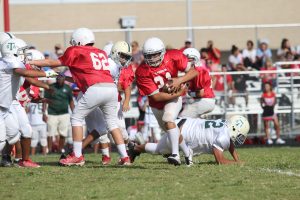 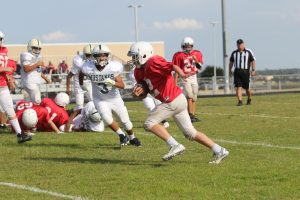 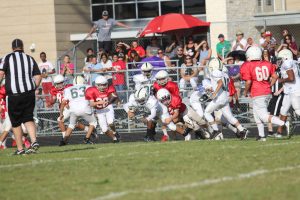 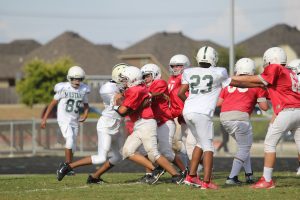 NBMS 7B hosted Travis Science Academy 7B in the opening tilt of the night.

Gavin Street scored on a 43-yard touchdown pass from Cooper Mees and a 75-yard kickoff return.

However, two fourth quarter rushing touchdowns by the Mustangs dashed the Tigers’ hopes of an opening-night victory, as they fell 25-13.

The NBMS defense stopped Travis’ first drive, as a combined tackle for loss by Jayden Lopez and Mark Aragon on fourth down and four at the Travis 48 set the Tigers up with solid field position on their opening drive.

After a pair of Jose Mejia rushes for seven yards, the Tigers were faced with a third down and three at the Travis 43. Mees dropped back and flipped a screen pass to Street, who deked a couple of Mustang defenders on his way to paydirt. Mees pushed his way across the goal line for the conversion to put North Belton up 7-0 with 1:40 to play in the first quarter.

NBMS fumbled on a couple of key drives that were sandwiched between a clutch end zone interception by Street.

Travis answered with a 16-yard touchdown run with seven seconds to play in the first half. The Mustangs missed the conversion, as the Tigers took a 7-6 lead into halftime.

Street followed excellent blocks on the ensuing kickoff for a 75-yard kickoff return for a touchdown. Mees was stopped just short of the line, which kept Tigers in the lead by a point with 1:48 to play in the third quarter, 13-12.

Reilly Martinson’s sack for a loss of eight yards forced Travis into a third down and 24 at their own 46. They converted with a 54-yard touchdown run and missed the conversion. They led 19-13 with 5:43 left in the game.

A crucial fumble on a fourth down and 16 try at Belton’s 34 proved costly to the Tigers’ final march down the field.

Travis scored two plays later on a 15-yard touchdown run to seal the game. The pass failed which kept Travis with a 12-point lead with 2:32 to play. They recovered an onside kick and salted the remainder of the clock away.

NBMS will host Bonham on Monday, September 16 at 5 p.m.