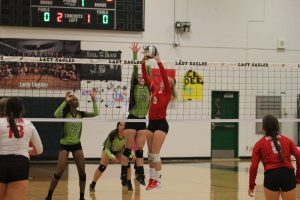 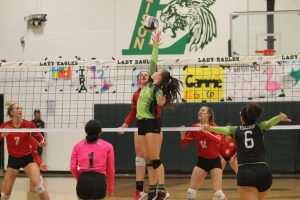 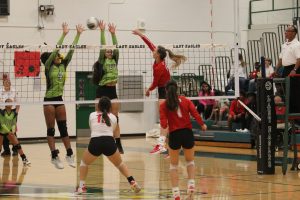 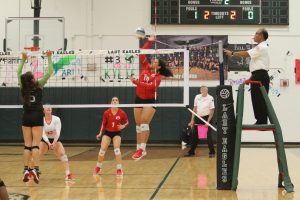 After an emotional win over Temple on Friday night, the Belton Lady Tigers volleyball team headed west to take on the Killeen Ellison squad at Eagles Gym on Tuesday night.

All the right moves went the way of the Lady Eagles, as Belton struggled to find momentum during the match. At the end of the night, the frustrated Lady Tigers dropped the match to Ellison in three games. The scores of the contest were 25-18, 25-18 and 25-17.

The match started much in the way others have started this season for Belton. McKenzie Mansell assisted on Abbey Karcher’s first kill of the night to give the Lady Tigers the early lead. Ellison embarked on a 10-2 run to that left Belton searching for answers.

MyKaela Johnston and Emily Holder combined for three straight attacks to pull the Lady Tigers to within four points, 10-6. Ellison then went on a 9-4 run to go up 19-10.

Belton trailed 21-13 when they scored five straight points, the final two on Karcher aces, before Ellison took a timeout to stop the momentum at 21-18. The Lady Eagles scored the final four points to take the first game by seven points.

The Lady Tigers jumped out to a 3-1 lead before Ellison tied the game at 3-3. The lead changed hands twice before the Lady Eagles went on top, 8-5. Miranda Davila’s ace capped a four-point run for Belton to give the Lady Tigers a 9-8 lead. Ellison finished the game on a 17-9 clip to win the second game by seven points.

Belton came out with some energy in the third game and trailed 5-4 when Ellison scored six straight points to take an 11-4 lead. The Lady Eagles extended their lead to 10 points at 18-8 before Belton put together a final push. However, the Lady Tigers could only pull to within six before losing the third and final game by eight points.

“Ellison is always a worthy opponent, and they were prepared for their home match this evening,” Belton Head Coach Krystal Brodbeck said. “We allowed their persistence to interfere with our team effort, and it took too long for us to regain our composure. We focused too much from a reactive standpoint and did not take charge. It’s time to regroup and hit the next few practices hard before we host Cove a week from today.”
Belton hosts Copperas Cove on Tuesday (Oct. 15) in a rematch of the Lady Tigers’ thrilling win at the Dawg Pound on Sept. 13.
Tigers Official Sponsor
Jan
24