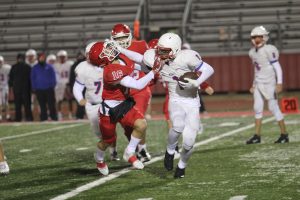 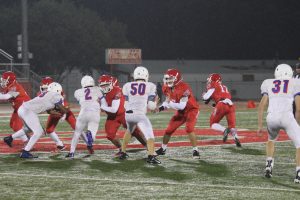 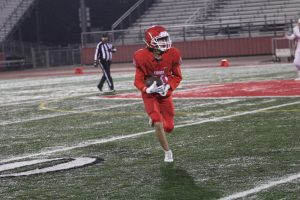 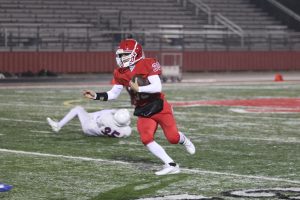 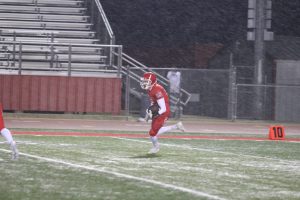 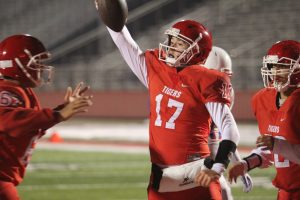 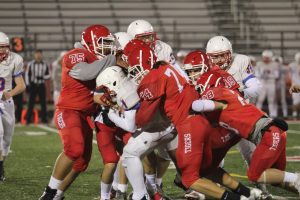 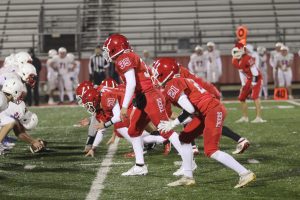 From the start to the finish of the Belton Tigers’ Freshman Red’s ball game against Midway at Tiger Field on Thursday night, the weather left everything to be desired.

From torrential rain and bitter cold to a rough, gusting north wind, both teams fought the elements.

However, the Tigers were able to get the Panthers to commit several costly turnovers and put four touchdowns on the scoreboard for a 25-7 win over Midway.

The win gave Belton a share of the district championship.

Although Sam Babcock returned the opening kick 60 yards, the teams slogged through a messy first quarter before Belton scored on Daniel Hardin’s eight-yard touchdown run on a direct snap. A bad snap foiled the extra-point attempt to keep the score at 6-0 with 9:52 remaining in the first half.

The Tigers got hard, punishing running by Tristan Robin and Connor Crews.

On defense in the first half, Garrett Oliveira picked up a nine-yard tackle for loss, and Sam Babcock and Hardin each had interceptions.

A big third down stop of the Panthers on offense by Etahn Sandoval and company, as the Tigers took over at their own 20-yard line.

An 11-play, 80-yard, 3:32 scoring drive followed for the Tigers, as Robin carried 59 yards in the march. Crews’ nine-yard scamper on third and goal resulted in the eventual game-winning touchdown. The two-point try failed which kept the Tigers in a 12-0 lead with 4:39 to play in the third quarter.

Challen Ma’ileoi had two huge stops on the Tigers’ next defensive series, as Belton halted the Panthers at the Tigers’ 24-yard line.

Belton nearly had a score at the start of the fourth quarter, but a fumble out of the back of the end zone resulted in a touchback.

Dominick DeLeon forced a fumble that Robin came up with at the Midway 36. Crews closed the 36-yard drive with a five-yard touchdown run. The two-point conversion failed as the Tigers kept an 18-0 lead with 6:46 to play in the ballgame.

Midway took four minutes off of the clock in scoring on one-yard plunge to cap a seven-play, 60-yard drive. The extra-point pulled the Panthers back to within 11 points with 2:49 to play in the game.

The Panthers’ onside kick did not travel 10 yards which gave the Tigers the ball at the Midway 47. Two plays later, Robin scored on a 42-yard run with 1:16 to play. Miguel Herrera’s extra-point made the score 25-7.

Midway recovered the pooch kick, but could not convert as time ran out.