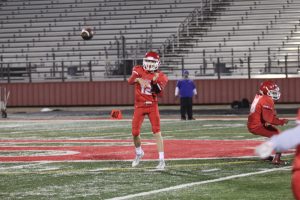 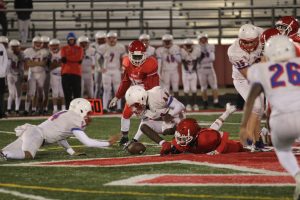 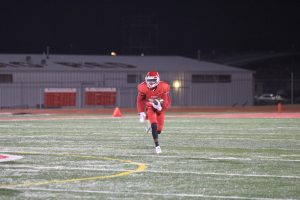 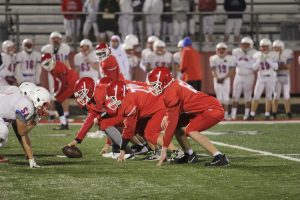 Easton Hammond scored on a run-pass option play, and Giovanni Walked collected a touchdown and clutch interception on Midway’s final drive to defeat the Panthers 13-6.

The win clinched the outright district championship for the Tigers.

Belton received the ball to start the game and immediately went to work from their own 21-yard line. Hammond’s 12-yard run set up a pass to Otis Kent in triple coverage for 11 yards. After a big run by Isaac Jones, the Tigers were faced with fourth and 13 at the Midway 34. Hammond handed the ball to Walker on a right-to-left end jet sweep. Walker got a crushing block from a teammate to complete the 34-yard touchdown run. Reynaldo Castillo’s extra-point put the Tigers up 7-0 with 4:55, following the 11-play, 79-yard drive.

The Tigers recovered an onside kick, and Emerson Foutz hit Bruce Onchweri on a sideline pattern for a 25-yard gain. However, the Tigers’ drive stalled at the Midway 11 on downs.

The Panthers’ initial drive covered 15 plays and 44 yards, but Midway was unable to move the ball any further. The punt went just four yards into a stiff, northerly wind.

Both offenses struggled with passes being knocked down by the wind, as the half ended with the Tigers leading 7-0.

A three-and-out by Midway to start the second half led to a 30-yard punt return by Onchweri to set the Tigers up at the Midway 34. After a 18-yard pass from Hammond to Cooper Staton, Hammond pulled down the ball during a run-pass option play and raced 21 yards for the score with 8:25 to play in the third quarter. The point-after try failed which kept the score 13-0.

A fumble recovery by Aidan Mollohan helped the Tigers get into prime Midway real estate at the 38-yard line. Foutz found Jones and Adrien Garza on passes to get the Tigers down to the Midway 9. After a one-yard gain by Jones, three straight incompletions forced the Tigers to turn the ball over on downs.

Midway held the ball for the next 7:37, covering 92 yards on 17 plays. An 11-yard touchdown run put the Panthers on the board with 6:25 to play in the game. The two-point conversion was stopped to keep the score at 13-6.

Following a three-and-out punt by Belton, Midway had a final shot to tie the game. Walker hauled in an interception and raced to the Midway 40 with 2:12 remaining to seal the win.