On November 13th, 4 Lady Tigers will be signing their National Letter of Intent to continue their academic and athletic careers. It is through hard work and dedications that these athletes have earned the chance to play at the next level. Abbey Karcher & Emily Holder (7-11) representing Belton Volleyball, Bayley Cox & Abby Lucksinger representing Lady Tiger Soccer will be signing on Wednesday. The ceremony will take place at 5:15 in the Belton Athletic Complex Weight Room. We hope you can join us as we celebrate the hard work and accomplishments of these athletes! 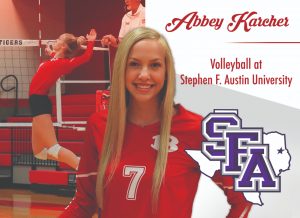 Abbey exceeded as a two-year varsity letterman after being pulled up to join varsity for playoffs as a sophomore. She made an incredible debut in her junior season earning the District 12-6A Newcomer of the Year and the Belton Volleyball Newcomer of the Year awards. Abbey also earned the 2018 Waco Tribune All Super Centex Honorable Mention team. In the summer of 2019, Abbey competed as a member of the Waco Juniors Select volleyball team that finished 5th at the USA Volleyball Junior National Championship. Abbey was selected as a captain for her 2019 senior season. She was a Temple Daily Telegram Athlete of the Week, and also was selected to the 2019 Decatur All-Tournament team.

The Belton Volleyball program will truly miss Abbey’s presence. There is no doubt that her accolades are a product of her intense dedication to the sport of volleyball and her personal commitment to excellence. Abbey committed to countless hours of time outside of the regular season to improve her craft, and her dedication is why we are here today to celebrate her accomplishments. We want to thank her for her dedication to Belton Volleyball, and look forward to following her future success as a Ladyjack! 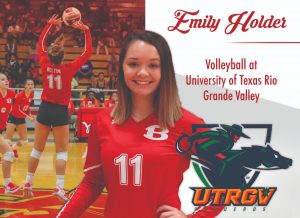 Emily Holder is a three-year varsity letter winner. Emily earned District 8-6A first team All-District as a sophomore, and the Texas Sports Writers Association All-state honorable mention team for her performance on the Belton 2017 Bi-District Champion volleyball team. As a junior, Emily earned District 12-6A Most Valuable Setter and the Belton Volleyball Best Offensive Player award. Emily’s commitment and achievements for her select volleyball team, Waco Juniors, earned her national recognition as a member of the American Volleyball Coaches’ Association Phenom program. In the summer of 2019, Emily competed on the Waco Juniors team that advanced to the USA Volleyball Junior National Championship and finished 5th overall. Emily earned a spot on the USA Volleyball Junior Nationals All-Tournament team. As a senior, Emily was selected to the American Volleyball Coaches Association Under Armour All-American Watch List. Her peers selected her as a Captain for her senior season.

Emily’s success is a result of her hours of extra work outside of school, and her commitment to improving and becoming her best version of herself. Emily’s tenacity was a driving force for the Belton Volleyball program. Her leadership, determination, and dedication will serve her well in her future endeavors both on and off the court. The Belton volleyball program would like to thank Emily for her outstanding contributions to the program, and look forward to her future success. 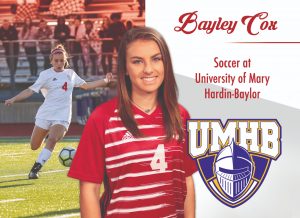 Bayley came to Belton HS as a junior and was an impact player for Lady Tiger Soccer in her first season in the program. Lady Tiger Soccer will rely heavily on Bayley’s soccer experience and talent this season. She is a very strong, fast, and tenacious defender who will play a big part in the 2020 soccer season.

She is also an outstanding student. Bayley is able to juggle a rigorous academic load while maintaining high A’s in all of her classes through the first nine weeks of the school year. She is a great example of a dedicated student athlete!

Bayley will be continuing her soccer career by playing at the University of Mary Hardin Baylor in the fall of 2020. The Lady Cru soccer team continues to be one of the top teams in the American Southwest Conference, and Bayley will be a great addition to an already very competitive soccer program.

Coach Bersoza says, “I was excited when Bayley came to Belton because from the beginning she showed that she was a good player with ambition.  Bayley is a player that adds physicality and tenacity to our team which are very important qualities for Lady Tiger Soccer. We are glad she has decided to join fellow Lady Tiger Soccer alums at UMHB where she will be a tremendous asset. Go Cru!”

Congratulations to Bayley on this milestone achievement, and Lady Tiger Soccer wishes her the best at UMHB. 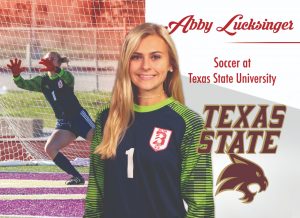 Abby is a committed student athlete who has been able to maintain high grades while also juggling high school and club soccer.

Coach Bersoza says, “Abby is a very driven athlete. Abby is unique in her dual talent as a field player and goal keeper. She can just as easily start every game on the field or in the goal. Her desire to play where the team needs her most is what is most impressive.  Abby’s diversity as a soccer player is a tremendous asset to Lady Tiger Soccer.”

Abby will continue her soccer career by signing a letter of intent to be a goalkeeper at Texas State University. The Lady Bobcats have a highly competitive soccer program in the Sun Belt Conference. Abby will be joining a Texas State team that will only be returning one goal keeper for the 2020 soccer season.

Years of hard work have paid off! Congratulations Abby and blessings as you begin this next step in your life! Texas State is getting a versatile player who is determined to excel wherever the coach may need her!