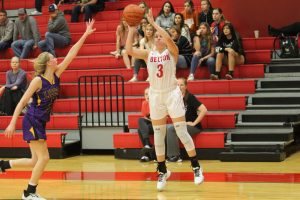 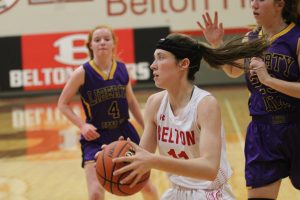 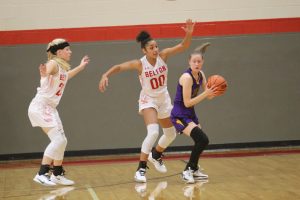 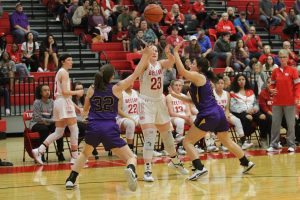 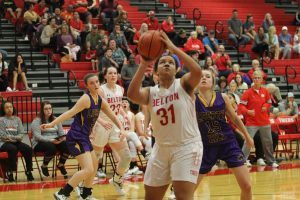 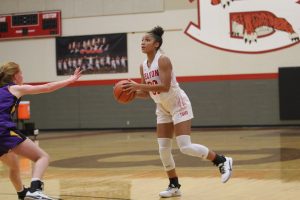 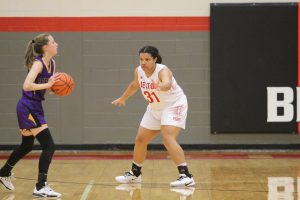 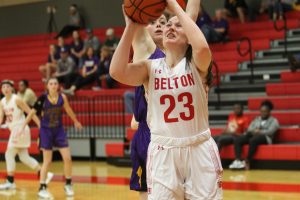 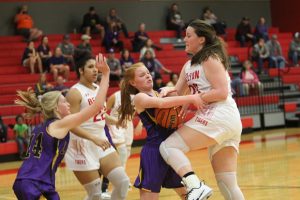 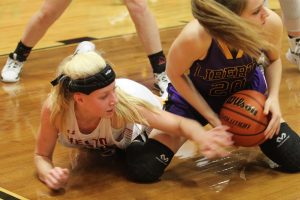 The game proved to be a good defensive game, with no player in the contest scoring more than nine points.

Belton shook off a nine-point lead in the third quarter and an eight-point lead with 3:33 in the fourth quarter. The Lady Tigers whittled the deficit down to a point. However, four free-throws in the final 27.5 seconds gave Liberty Hill at 38-33 win over Belton.

Both teams displayed the defense early, forcing multiple turnovers and blocked shots. Emma Hubbard scored the first point on a free-throw for the Lady Panthers 1:02 into the game. Nylah Modeste answered 1:21 later with a free-throw before Jessica Holiday’s three-pointer from the left elbow of the arc gave Liberty Hill a 4-1 lead.

Two free-throws by Baylee Laird extended the lead to 6-1 with 42.9 seconds to play in the opening period.

Liberty Hill capped the scoring in the first quarter with a 25-foot three-pointer at the horn by Avery Harrell. The Lady Panthers led 9-3.

The biggest lead of the game came at the 6:26 mark of the second quarter, after Olivia Shelton hit a free-throw and Regan Walker completed a three-point play to give Liberty Hill a 10-point advantage, 13-3.

Brindley Bradford popped in a 12-footer and Campbell Burnett picked up a three-point play the old-fashioned way to pull the Lady Tigers back to within five points, 13-8, with 4:02 to play in the first half.

Belton mustered just three more points after that point, with Lilli Small scoring on two free-throws and Modeste converting one. Liberty Hill led by seven points at the half, 18-11.

The Lady Tigers alternated field goals by Small and Karina Fisher around a pair of field goals by Laird. Holliday’s basket with 4:48 to play in the third quarter gave Liberty Hill at 25-16 advantage.

Fisher, Modeste and Burnett combined on an 8-5 finish of the third quarter, as Belton trailed by six, 30-24.

Neither team scored until Laird hit a field goal with 5:12 to play to extend Liberty Hill’s lead back out to eight points.

Modeste’s three-pointer from the left corner set off a frantic 9-2 run, with Wade scoring six straight points inside on assists from Fisher and MyKaela Johnston to make the score 34-33 with 49 seconds to play.

Liberty Hill killed off some clock in the offensive end before Modeste was forced to foul Kenszi Wise with 27.5 seconds remaining to put the Lady Panthers into the bonus. Wise converted both free-throws to stretch Liberty Hill’s lead back out to three points.

After Wade’s field goal try in the paint hit off of the front of the rim, Fisher was forced to foul Holiday with 4.2 seconds to play. Holiday converted both free-throws and the Lady Tigers lost the decision by five points.

Laird had nine points for Liberty Hill, and Holiday added eight points. The Lady Panthers went 12-of-19 from the foul line.

Modeste scored nine points for Belton, as Wade score eight points, Fisher and Burnett each scored five points, and Small scored four points. The Lady Tigers were 7-of-11 from the free-throw line.

Belton hosts district-rival Copperas Cove on Tuesday night (Dec. 3) at Tiger Gym. It will be the first time that the Lady Tigers will go up against former Belton JV basketball coach Tiffney Barnes, who is the new coach for the Lady Dawgs.