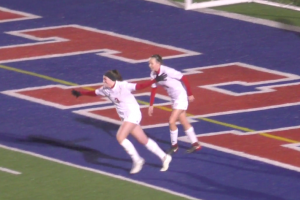 On a dreary & frigid Tuesday evening at Panther Stadium, the Belton Lady Tigers squared up against fellow district 1st place foe, the Midway Pantherettes.  It only took 12 minutes for Lady Tiger Soccer to get on the scoreboard as Kirsten Bush tracked down a carefully weighted Sara Navarro through ball.  The Midway goalkeeper did her best to manage the through ball but Bush got to the ball first and smashed it home for valuable 1-0 Belton lead.

10 minutes later Lady Tiger Soccer got a corner kick that Abby Cargile flighted into the 6-yard box.  Both teams scrambled for the ball but a semi-clear by a Midway defender ended at the feet of Belton left-back Madison Farwell.  Careful calculations by the junior defender resulted in a ball served/shot back post and into the goal to make it 2-0 Belton.

Katelyn Chrisman only recorded 1 save off of a well-struck ball by a Midway attacker.  Chrisman did have to sniff out a few threw balls but ended the night with a shutout against a Midway team that had 46 goals for in district play.

“The weather conditions we such that it was going to be a sloppy game by both teams which is an uncomfortable place to be for a coach.  We just can’t predict how it will affect the mindset and play of players.  These girls really answered the call and stepped up. Plenty of work still left to do for us but we’ll enjoy a light practice tomorrow before we start the second round of district play.”

Lady Tiger Soccer Varsity and JV Red travel to Copperas Cove on Friday while the JV White Team will travel to Leander Glenn.

**NOTE** Midway was without their head coach due to Strep. Lady Tiger Soccer is wishing him a speedy recovery.