It was not your average Thursday night in Killeen, as the Belton Tigers took on the home-standing Kangaroos at Leo Buckley Stadium in the opener of District 12-6A play.

It had that déjà-vu feeling: the feeling that you have been there before.

In a game the resembled the season-opener against Georgetown when the Tigers had a 27-7 lead in the second half, the Tigers had a 26-9 lead over Killeen with 4:31 to play in the third quarter against the Roos when a 93-yard kickoff return changed the momentum in the direction.

The irony: it was the 85-yard kickoff return by Maurice Reed with the Tigers trailing 28-0 in the second quarter against Round Rock that inspired a huge Tiger comeback.

Except for this time, there was a different ending

Belton survived a 17-point surge by the Roos over the stretch of 9:57 in the second half with steady defense late in the fourth quarter and a 51-yard drive that was capped off by a Ruben Jimenez 17-yard touchdown run with 51 seconds to play. Trent West intercepted a Hail Mary pass on the Belton 20-yard line as time expired, as the Tigers won their first ball game of the 2020 season with a 33-26 win over Killeen.

Killeen won the toss and deferred to the second half. Belton took the ball and drove 14 plays, covering 67 yards. On second down and six at the Killeen 7, a fumble halted the Tigers’ first drive.

The Roos’ first drive landed them in a pivotal third down and five situation. Joe Sniffin intercepted Ahmed Bailey’s pass over the middle at the 15-yard line and he raced to the right for the interception return touchdown with 6:35 to play in the first quarter. The Roos blocked the extra-point try by Zach White. Xaiver George finally grabbed the handle on the ball at the Killeen 40 and raced to the end zone for two points, which made the score 6-2.

After the Tigers’ defense held Killeen to their own 45-yard line, Belton got the ball at their own two-yard line to start the next drive. The Tigers worked their way out of the shadows of their own goalposts, used a 60-yard run by Reed to flip the field, a 16-yard jet sweep by Kanyn Utley to get the Tigers to the two-yard line, and Reed’s two-yard run to increase their lead to 12-2 with 19 seconds to play in the first quarter. The two-point conversion failed.

Killeen answered with a 65-yard scoring drive, getting a 36-yard scramble from Bailey and a 19-yard touchdown pass from Bailey to Kadarius Marshall. Noriel Gomez’s extra-point cut the deficit to three points with 10:02 left in the first half, 12-9.

The Tigers took the football on a pooch kick at the Killeen 47 and drove it down to the Roos’ 13-yard line. On second down and one, Reed bulldozed his way inside the five. However, a Kangaroo defender stripped the football and returned it to the 22-yard line.

Killeen began to pick up momentum before Bailey was sacked by Malik Jackson and Charles Williams III on second down and 13 at the Roos’ 40. On third down and 21, Aaron Bain picked up his second interception of the season and returned the ball to the Killeen 40.

On the next play, the Tigers executed a flea-flicker to perfection at Jimenez handed off to Reed who took two steps, pitched back to Jimenez. The Belton quarterback took three steps back, threw the ball to the end zone where Itty Henry hauled in the pass for the Tiger touchdown. White’s extra-point with 5:43 to play in the first half gave Belton a 19-9 lead.

The north wind created havoc for kicking games all night. Shortly before the half, Tra-bi Diakite’s six-yard punt landed at the Killeen 27 with 1:03 to play in the first half.

Jimenez threw a pass toward the end zone on the next play, where Imek Berkley intercepted on the goal line to end the Tigers’ scoring threat. The Tigers took a 19-9 lead into the locker room.

Emory Arthur’s 40-yard kickoff return gave Killeen excellent field position to start the second half at the Belton 40. Williams, Jackson, Bain, and Sniffin stopped Marshall and Bailey on the first two downs. Braxton Haynes sacked Bailey for a six-yard loss, forcing a 24-yard punt by Diakite into the wind.

Reed’s 43-yard run put the Tigers on the verge of another score. Jimenez completed the drive with a four-yard touchdown run. White’s extra-point Belton up by 17 points with 4:31 to play in the third quarter, 26-9.

William Hayes’ kickoff was fielded by Arthur at the Killeen 7. He made three cuts to the left side and raced 93 yards for a Kangaroo touchdown. Gomez’s extra-point cut the deficit back to 10 points with 4:14 remaining in the third quarter, 26-16.

Belton advanced 12 yards on the next drive before a fumble stopped the drive at their own 44-yard line.

Seven plays later, Bailey hit John Scott in the left corner of the end zone for a 13-yard touchdown pass. Gomez’s extra-point sliced the Tigers’ lead to three points with 26 seconds left in the third quarter, 26-23.

The Tigers were unable to answer on the next drive, and Hayes’ punt took a Kangaroo hop and was downed at the Killeen 39.

Killeen appeared to score the go-ahead touchdown with seven minutes to play, as Bailey connected with Marshall on a 26-yard touchdown. However, Bailey was flagged for an illegal forward pass and a loss of down was incurred.

On fourth down and 16 at the Belton 34, Diakite attempted a 51-yard field goal that was short and drifted left. However, a running-into-the-kicker call moved the ball to the Belton 29, which allowed Diakite a 46-yard try. The second kick sailed between the uprights barely over the crossbar to tie the game at 26-26 with 6:54 to play in regulation.

The Tigers converted a third down and five at the Belton 30 with an eight-yard run by Jimenez. On second and 13 at the Belton 35, Dermontti Williams intercepted Jimenez at the Killeen 45.

Bain dropped Arthur after a short gain on first down, Jack Tabat tackled Davontay Monroe on second down and Bailey sailed a pass for an incompletion on third down. On fourth down and three at the Belton 49, Bailey short-hopped a pass incomplete to give the Tigers the ball back with 3:36 to play in the game.

Belton’s final drive covered eight plays and 51 yards, taking 2:45 off of the clock. Jimenez converted two third downs with runs, and the Tigers found themselves in the red zone. On first down and 10 at the Killeen 17, Jimenez rolled to his right, got around the edge with excellent blocking from his linemen, and sprinted over the goal line for the go-ahead touchdown with 51 seconds to play. White’s extra-point gave the Tigers a seven-point lead, 33-26.

Killeen took over at their own 30 with one timeout remaining. Jackson and Haynes combined to sack Bailey on first down, and John Wellington dropped Arthur after a nine-yard gain on second down. Arthur caught an 11-yard pass and Bailey spiked the ball with a handful of seconds left. Bailey sent four wide receivers to the top of the formation and Marshall split to the bottom. Bailey took a deep drop back and threw toward Marshall in triple coverage. The ball sailed past Marshall and into the waiting arms of West to end the ballgame.

Killeen had 175 yards of total offense, with Bailey going 14-of-27 passing for 119 yards, two touchdowns, and two interceptions. 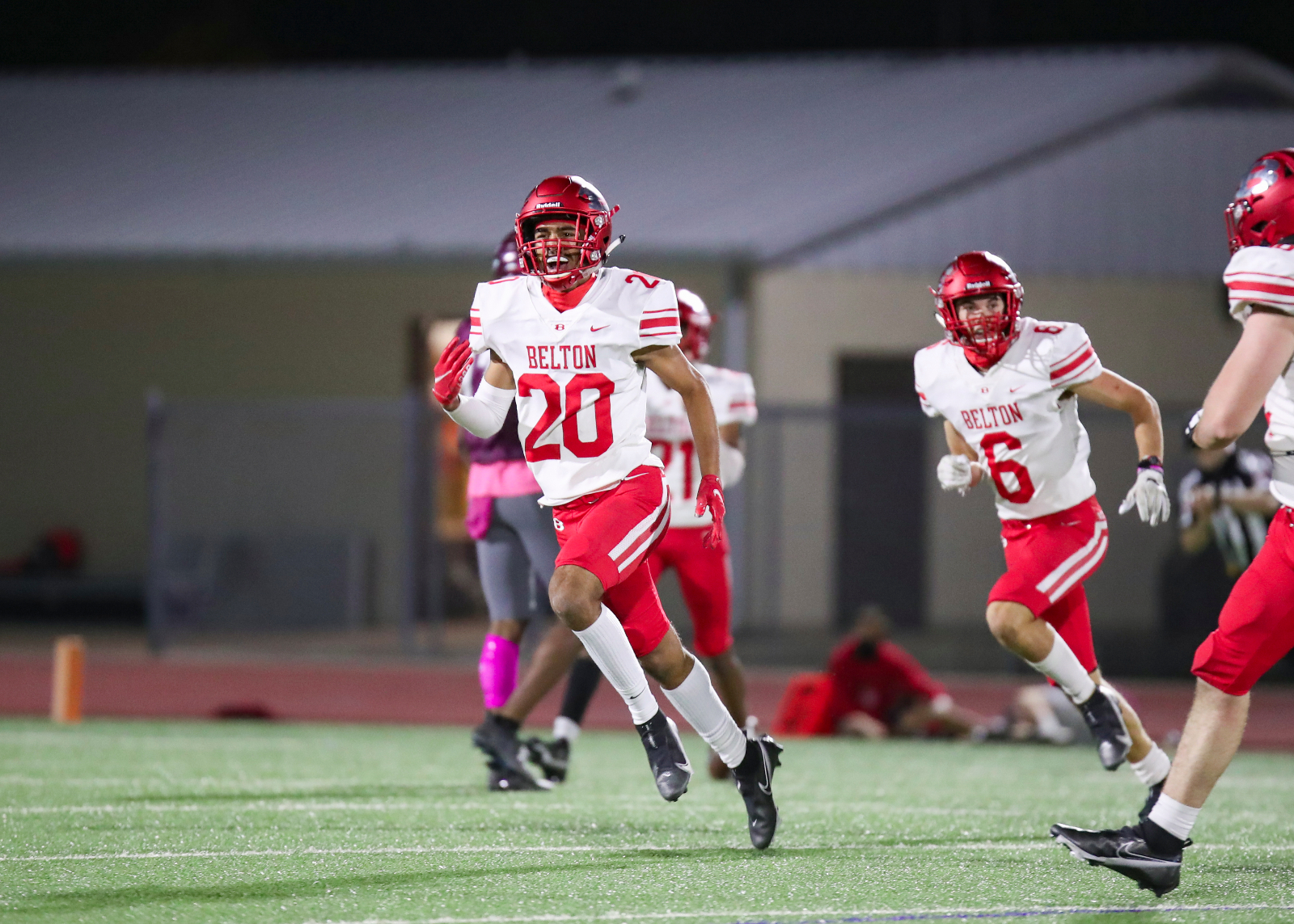